Focus on the textile world: from DIY to road building

Short planning phases and very quick completion of infrastructure projects have contributed to China now being the second-largest economy in the world. The expansion of infrastructure can hardly keep up with the pace of this growth. The East is the engine of the country's economic growth, but the West also occupies an important role in the plans of the Chinese government: with the so-called "Go West" strategy, even sparsely populated regions are now being provided with infrastructure. This is now on a level with Europe in China's coastal provinces, while in recent years the infrastructure in the twelve central provinces has only been gradually increased. 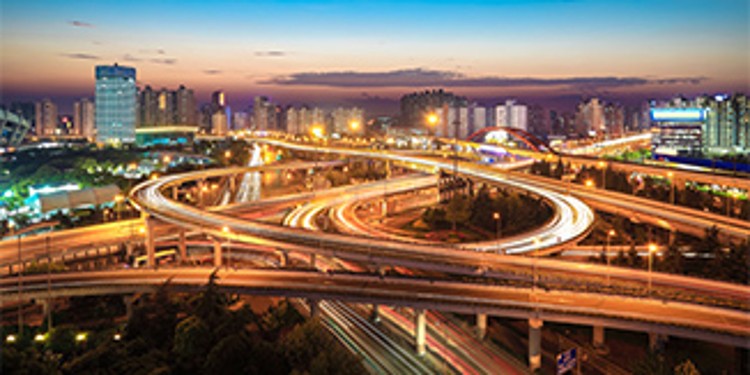 Highway construction is one of the most country's important infrastructure projects, since in China about 75% of all shipments take place by road, followed by rail at 13% and waterways at 11%. By 2035, an investment of over 200 billion euros has been earmarked for the expansion of the road network alone. Around 500 billion more euros are planned for the expansion of the country's rail network.

Currently there are around 500 airports in China. In comparison with the USA, where the number of airports and airfields is over 13,000, China has a lot of catching up to do. The Chinese government noticed this long ago, however, and the plan is to build an average of 20 new airports each year until 2035.

Boom in construction – nonwovens are of key impotance

The plan is for the nonwovens industry in China to also benefit from this extensive nationwide infrastructure upgrade. This is because geotextiles have increasingly being used in construction ever since the 1960s. Initially this mainly applied to fabrics, but during the late 1970s there was increased demand for nonwovens, due to their versatility and economic applicability. Nevertheless, even today, fabrics are used as geotextiles in almost all areas of construction. The main purpose of geotextile fabrics today is to generate an additional reinforcement effect or to serve as the sole reinforcement. In road construction, however, the main focus is on the elongation capacity of a geotextile, and in most cases its reinforcement function plays a subsidiary role.

A choice based on diverse requirements

Here, the geotextile prevents two different soil layers from being mixed together.

Here, for example, pipelines are protected from damage during spillages.

The geotextile assumes the task of absorbing tensile stresses between individual soil layers or materials.Requirements:

Here rainwater has to be absorbed and diverted, while at the same time the geotextile has to keep back materials such as stones and mud. A drainage geotextile is usually built up in several layers.

In most cases, fabrics or nonwovens are not uniquely assigned to any of these purposes, although the differences between geotextiles consisting of fabrics and those consisting of nonwovens can sometimes be considerable. For example, a geotextile made from carded fibers would have to weigh three to five times as much in order to achieve the tensile strength of a fabric. Fabric, on the other hand, is often incapable of economically fulfilling the requirements posed by water absorption and filtration.

Geotextiles made from nonwovens

Usually, a carded nonwoven fabric can for instance be made with a fiber fineness of 1-110 dtex. With a spunbond, the manufacturer is typically limited to products of 1-10 dtex.

Competitive benefits thanks to Groz-Beckert

In view of upcoming major investments, it is likely that acceptance criteria for geotextiles in China will be far stricter in the future, and that there will be cross-regional, uniform requirements. Demands placed on the stability of manufacturers' production processes will also increase significantly. A consolidation of the market is to be expected, and the companies with a stable production process are the ones who will become market leaders.

In their respective sectors, the market leaders worldwide make almost exclusive use of needles from Groz-Beckert. Thanks to their advantageous properties in terms of process reliability, wear and tear, and robustness, Groz-Beckert needles offer competitive advantages that secure this superiority in the geotextiles market.

Meanwhile Groz-Beckert itself has been able to expand its position as the world's leading manufacturer both in terms of quality and quantity. Continuous further development of products in the felting sector, enabling even more precision, durability and efficiency, has made this competitive edge possible.