The textile world at a glance: From litespeed® plus to dur

A responsible treatment of natural resources and social responsibility are essential aspects of business activities and the basis of long-term success. These goals are reflected in the Groz-Beckert values – serious, quality conscious, fair and cooperative, innovative – which guide our actions. Products and services from Groz-Beckert, both internally and externally, should be customer-oriented and reliable, because gaining competitive advantage is not just part and parcel of corporate strategy for Groz-Beckert. Every benefit, small or large, can be crucial to nonwovens producers.

Selecting the right needle, for instance, significantly influences the needling process and thereby product result and cost-effectiveness. In order to provide customers with this essential competitive advantage we support you in your day-to-day work by converting your needs into our product innovations and services.

Groz-Beckert® “dur is a visible example of Groz-Beckert’s innovative capacity” in the Felting subdivision. “dur” forms part of an innovation initiative occupied with new and further development of needles and their performance – the EcoStar® needle emerged from it (first presented at the ITMA Barcelona 2011).

“dur” is distinguished by a combination of patented manufacturing process and new base material for a significantly harder surface. Comprehensive field tests covering all areas of application show that the “dur” needle – with unchanged needle geometry and increased resistance to corrosion – has in average 30% higher service life as compared to standard material. Needling parameters such as penetration depth and density need not be changed. Once needles have been replaced, production can continue without further interruptions.

In order to maximize the extended service life (in average to 30%), the needle-rotation system should be adapted. The cycle until the next needle rotation is thus extended by 30%. This means that when the rotation system is set to “dur”, needles remain in the board longer than in the standard version. This results in the product characteristics remaining the same over a longer period of time. 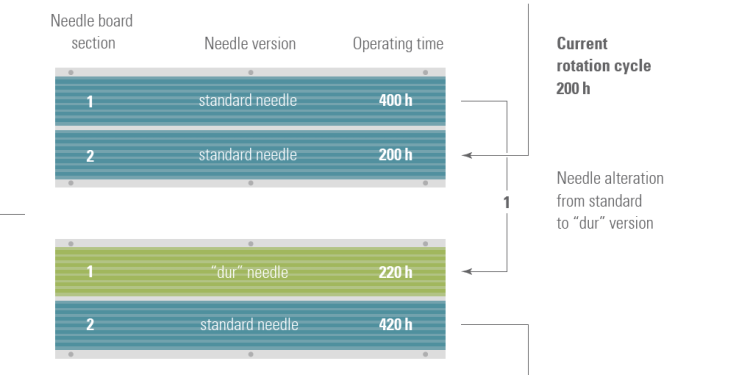 The illustration shows how the needle lifetime can be increased for example from 200 to 260 hours in a rotation cycle by using “dur” needles.

Needle barbs and forks retain their original shape significantly longer and can thus perform at the same level for a longer period of time. This results in reduced stitch density; i.e. advance per stroke, whereby productivity can also be increased.

Our challenges include the protection of nature and the climate in order to preserve the environment for today’s and future generations. At Groz-Beckert, responsible treatment of resources begins during the planning of processes, products and services.

The “dur” needle does its part by showing significantly improved resistance to corrosion. Rust deposits are noticeably reduced, leading to several advantages: Needle boards must not be sprayed with oil or other anti-rust agents for storage so often anymore, thereby putting less strain on the environment and saving resources. This also results in less oil residue and other substances on the initial running meters of goods produced by our customers and signifying, in turn, less material waste. Furthermore, “dur” needles are easily removed from the needle boards, even after long storage. To simplify the removal of felting as well as structuring needles, Groz-Beckert offers needle removal tools since several years for gauges from 19 to 43.

The needle removal tools with these gauges are especially designed for felting needles with triangular working part or special working parts such as Tri STAR®, Cross STAR®, tear-drop shapes. There is a technical overview in the media center on the Groz-Beckert Homepage and in the app “myGrozBeckert”. 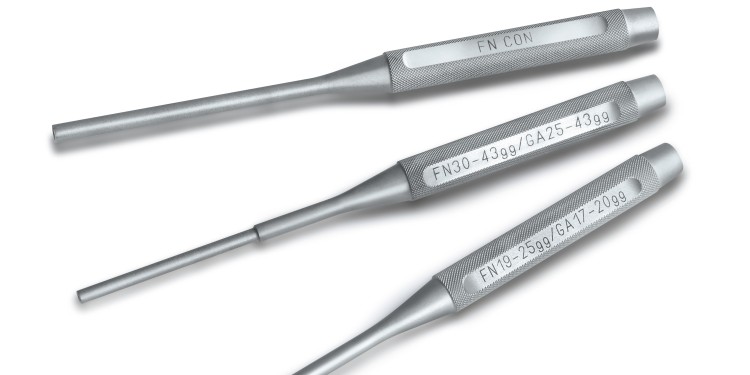 Groz-Beckert is successively converting needles from the product portfolio to “dur”. As a customer, the great majority will be made available to you without any markup. Check with us to find out which needle types are concretely designated for conversion.

Did you know this?